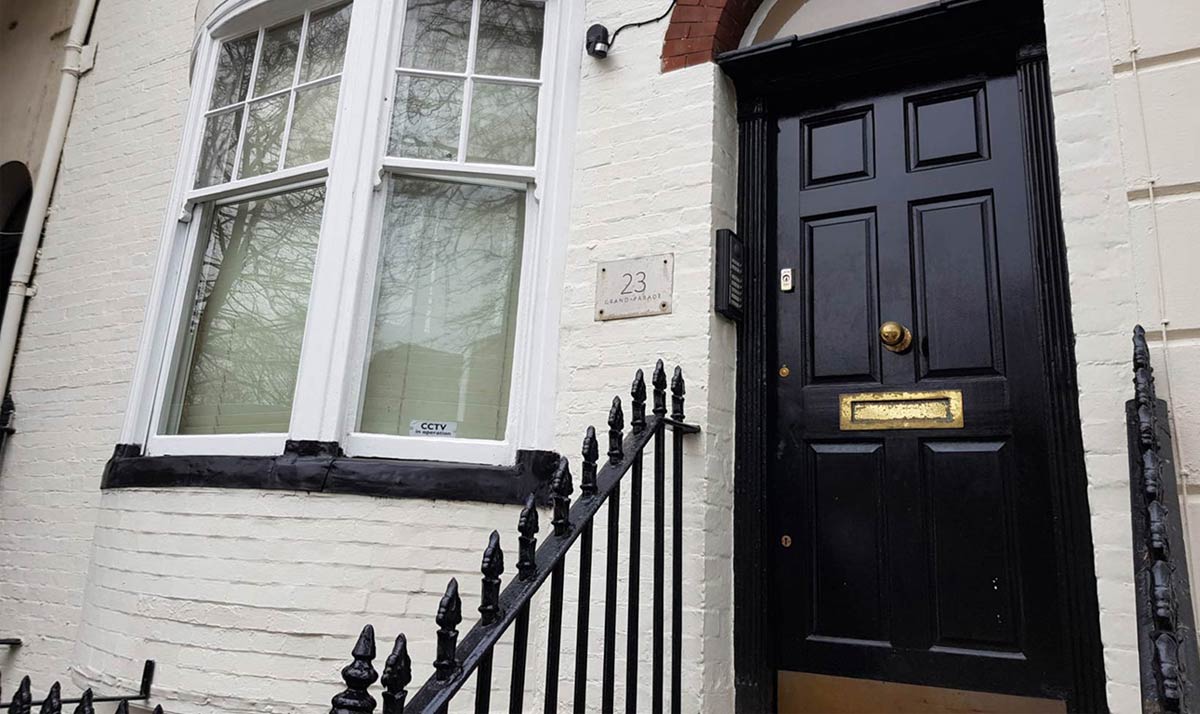 By Nick Tyson, curator of The Regency Town House

Let’s take a tour of the classic Georgian townhouse that is 23 Grand Parade, to set out the basics of the property’s evolution and to provide an overview that encompasses both the interior and the rear area of the house, so you can get a good feel for the general character of the building and some of the finer details the building retains.

Before we step inside though, let’s consider matters from out the front of the building in Valley Gardens. For much of the later-Georgian period this was the fashionable centre of Brighton. Long before the seafront became the place to live and promenade, in the late Regency period, well-to-do visitors to Brighton would seek houses here, in the 23 acres of the Valley Gardens, the area from the Steine to the Level, and would stroll up and down outside their properties, preening excessively, no doubt, as they passed one another, and the windows of the Royal Pavilion.

The houses forming the Grand Parade section of the Gardens seem to have been developed late in the 18th, and into the early 19th, centuries. The properties north of here are thought to be of the 1810s, those somewhat south, more of the 1790s. Here in the middle of the run, Carder, author of the Encyclopaedia of Brighton, places us 1810 to 1820 although some feel that 23 Grand Parade might be a little older than this.

Around and about the property, during it’s early years, were a variety of interesting structures, including the Royal Circus and Riding School, near No. 36, which opened in 1808, with billiards lounge, coffeehouse, and confectionery. It closed just 4 years later in 1812, however, having been unsuccessful; albeit that it’s commemorated today in the name of nearby Circus Street.

Closer, at No. 29, was The Grand Parade Chapel, built a few years later, in about 1835, while, along at No. 47, Lancaster House, was the first Brighton Grammar School, probably designed by Charles Barry, in about 1840. Barry is perhaps best known for rebuilding the burned down Houses of Parliament. Locally, he designed St Peters, just across the way, St Andrews chapel in Waterloo Street, Hove and the original piece of today’s Royal Sussex County Hospital, among his many commissions.

Whatever the exact build date of No. 23, it’s a delightful house to look at, and an even better one to occupy. Let’s go inside and explore.

Let’s start at the lower ground floor and explore the ‘domestic offices’ of the house. Here the servants would have worked, preparing food, undertaking their general duties, maintaining their employer’s goods and chattels etc.

As the plot size of the house is not overly large, the basement rooms are limited in scale and number, and we do not see the extensive range of ‘offices’ apparent in the slightly later-built and larger townhouses of 1820s Brighton. Nevertheless, here at No. 23 we do retain a very fine example of a 19th century cast iron range.

The range is fairly typical of the better quality models fitted in local houses during the 19th century, although few examples survive, and those that do are not often as well preserved as is the one here.

Looking at the quality of the range, we are invited to consider the likelihood that the house kitchen sported many other superior quality components! It’s frustrating that there is no sign of any such details today. Perhaps if we discover the whereabouts of our property deeds we might be lucky enough to find that, attached, there’s an inventory, listing, in detail, the fittings within the house.

Look carefully, and you can see that the range is badged ‘E.G.Brown Ltd. Brighton – The Imperial Range’, therefore from a local supplier. The town was a centre of excellence for cast iron production at the time these properties were built, and most of them would have utilised locally made and supplied cast fittings. In addition to the range, the area railings and gates, and the fireplaces here would all have been Brighton products.

A problem, often complained of in period in houses of this size, where the kitchen is located directly under the main block, is that the smells of cooking would permeate up through the living rooms and cause disturbance. Here in Brighton, where fresh fish was an important part of ‘the visit’, these smells must have sometimes been particularly noticeable.

Now lets move up to the ground floor.

During the main part of the Georgian period, it’s not unusual to find what’s called a double parlour design at ground floor level. This is where large doors connect the front and back rooms, enabling the two to be joined into a single suite. As you can see, that is likely the layout used here. Although, double parlour designs were becoming considered somewhat old-fashioned at the time this property is thought to have been built.

We hope to identify the deeds for the house one day, something that will help us to resolve the uncertainty surrounding the construction date. We should also be able to clarify this if we can find the relevant early rate books.

The two rooms are well proportioned and would have undoubtedly been considered desirable for their view onto the central gardens.

The romantic notion of hooves clipping the un-metalled road and birds singing in the valley contrasts with the reality of today. Now, we have secondary double glazing to hold back traffic noise. Were our forefathers have been disturbed or pleased by the noises they heard through the windows?

Being laid out east/west, the house was considered to have the preferred orientation, with morning light entering the back windows of the building and evening light the front. This arrangement allowed the occupants maximum benefit from natural light when entertaining in the evenings and thereby reduced the need for artificial lighting, a costly indulgence.

Let’s now climb the stairs to the first floor.

This level of the house provided important rooms for family use during the daytime and the principle reception area when entertaining in the evening. Sewing, reading, drawing, playing cards and practising music are likely daytime activities. Parties in the evening would be a fairly regular occurrence. Along with the ground floor, this part of the house is where visitors would be received, hierarchically therefore; these two floors received a much better standard of finish than did the upper floors.

Now up to the second floor.

These rooms are plainer, with lower status detailing, and would have been used as bedrooms.

On the third floor we see what is likely to have been servants’ accommodation, with vaulted ceilings and small dormer windows. The current configuration is one room, but it was almost certainly two small rooms in its original layout.

Now let’s descend and make our way out into the rear area, or yard, of the house.

Standing here, in the back yard, we can see intriguing signs of earlier features. Look at the rear elevation, can you see evidence of a structure having once been against this area?

Over time, it seems that the rainwater run off has leached away the mortar here, perhaps a strong indication of their having been a wall abutting the rear elevation in this location in earlier times.

As we look along this south wall there is the suggestion of a structure once having been here. Perhaps this rear area was designed in a way that was similar to those we saw in the neighbouring properties, as we looked out of the rear windows at second floor level.

Certainly, we need to allow for the back of the original house to have offered storage areas, as well as a privy and possibly a well.

Further back, beyond this wall, is another piece of ground that falls within the curtelage of this property. Has the land always belonged to the house and what used to be back here?

We speculate that there was once maybe a stable facility here.

It will be interesting to explore the records further and discover if we are close to being accurate about the rear of the property. If it was a stable, then the current use of the area – private car parking for the owners of 23 Grand Parade – retains a link to the past.

Stepping back into the yard, now furnished with timber garden furniture, just sitting here quietly is a delightful thing to do. The fabric from which the rear elevation is formed and the proportions of the parts of the building here all conspire to produce a delightful and restful experience. We’d like to think that our forefathers enjoyed the back of the house as much as they did the front. We certainly do!

Turning to some of the occupancy records we now have for the house we see that through much of the building’s early and more recent life it was used as a lodging house, with a brief interlude, in the 1870s, where it possibly functioned as a private home to a family headed by a master portmanteau maker.

So, it seems that our property was rarely the domain of a well-healed gent taking a whole Brighton house for his pleasure; but rather one of those hard worked places that catered to the needs of those a rung or two down from the top end of fashionable society, it rather brings to mind the scenes so powerfully portrayed in WM Thackeray’s ‘Vanity Fair’!

We hope you have enjoyed your visit to No. 23.